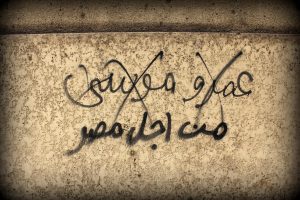 Amr Moussa, a veteran Egyptian diplomat and leading presidential candidate, has good reason to be happy. On Tuesday, three of his main opponents were removed from the electoral race by Egypt’s high elections committee, leaving him virtually alone to contend for the desired position less than a month before polls open.

Moussa did not gloat at his adversaries’ predicament as he launched a series of bullet points outlining his political program on Twitter Wednesday, promising Egyptians a better future through bombastic platitudes mixed with vague political and economic statements.

“My vision is a loyal translation of the revolution’s goals: freedom, social justice and human dignity,” he wrote. “Egypt requires almost total rebuilding. I will lay the ground for Egypt’s second republic, a republic detached from what came before.”