Morsi opens his own pandora’s box

Morsi opens his own pandora’s box

‘…you are reading this message because this newspaper objects to continued restrictions on media liberties, especially after hundreds of Egyptians gave their lives for freedom and dignity’ 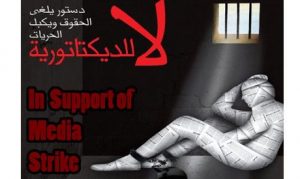 This is more or less an accurate translation of the message posted by twelve Egyptian newspapers including Al-Masry Al-Youm, Al-Watan, Al-Tahrir, Al-Wafd, Al-Youm 7, Al-Dostour, Al-Shorouk, Al-Sabah, Al-Ahaly, Al-Ahrar, Al-Fagr, Osbooa and even Al Ahram – Arabic-language news website reporters have decided to go on partial strike in solidarity with the ongoing media strike.

These newspapers decided to go on strike today whereas 5 TV channels will go off air tomorrow to also object to recently issued constitutional declarations giving Egyptian President Mohamed Morsi sweeping powers and the draft constitution that  falls short of protecting human rights and, in particular, ignores the rights of women, restricts freedom of expression in the name of protecting religion, and allows for the military trial of civilians, in addition to its ambiguous use of Sharia and the rule of an Ulama Council in interpreting Islamic law.

The Assembly that is drafting the Constitution after being dissolved earlier this year by a court ruling was reformulated to be dominated by Islamists with hardly any representation of women, Copts, or liberals and over the course of the last few months all opposition figures, and the Coptic Church has withdrawn from the committee in objection to the wording and process which has been described as one-sided and far from inclusive.

The draft Constitution now proceeds to a national referendum which will take place on December 15; such referendum requires supervision by Judges but Egypt’s Judges Club, an independent network of 9,500 judges, has announced that its members will not take part. However, that hasn’t stopped President Morsi from trying to preserve any cosmetic legitimacy to an already suffocating democratic process, so he called on the National Council for Human Rights (a semi governmental Human Rights Institution, with a board dominated by extreme right-wing Islamists) to observe the voting process, however, the staff members of the Council issued a statement yesterday declaring that they will refrain from doing so and stated their opposition to the process.

With opposition rallies heading towards Tahrir Square and the Presidential Palace, as well as opposition figures headed by Dr Mohamed ElBaradei threatening to call for a national strike, President Morsi seems to be facing an immense political crisis that he entirely manufactured and provoked.

Realistically speaking we have no reason to believe that a Muslim Brotherhood President would go for this option, as neither he nor his group have shown any willingness to compromise with revolutionaries since the fall of Mubarak. The Brotherhood only negotiates and compromises with decision makers, be it Mubarak, the military, or the U.S. on an international level, and never with peaceful liberals who neither have money nor authority.

The Brotherhood supporters are very mobile, they are easily put in buses and sent all over the country to demonstrate in favour of anything the President says or does- and sometimes to attack protestors who oppose them -and it wouldn’t be a surprise if the same people were shipped in cars and busses to ballot stations on the 15th to say yes to the constitution or actually for the new Imam who should never be opposed.

By deciding that he will do things the Mubarak way, I believe that Morsi has opened a new phase in the Egyptian revolution or more accurately he has ended the very short phase of the progressive moderate Islamist leader that appealed to so many spectators.

The Egyptian publics mood changes by the day, however, my hunch is that the majority of Egyptians (not the “Morsi Ultra fans” of course) will boycott the referendum out of frustration at the authoritarian way the transitional period is being handled. As an Egyptian I feel that any participation in this process will give it a sense of superficial legitimacy that will be later used by the Brotherhood to justify future totalitarian acts. Hence I will not go and say no to the referendum, instead I will protest and say no to a dictator in the making.