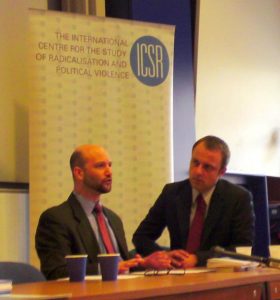 A sixty-hour-long ‘terrorist spectacular’ in Mumbai brought the militant group Lashkar-e-Taiba (LeT) to the attention of the world. Known primarily in the past as a Pakistan-based group focused on liberating Kashmir and waging a wider war against India, the group’s recent acts, culminating in the Mumbai attacks, suggest progression toward an al-Qaeda-style global jihad targeting Westerners. Can similar attacks be expected of LeT in the future?

On 27 April ICSR Associate Fellow Stephen Tankel presented his paper ‘Lashkar-e-Taiba: From 9/11 to Mumbai’ to an audience at King’s College London. Elaborating on his written analysis, Stephen put recent acts by the group in context, presenting a detailed overview of LeT’s evolution since 2001, its relationship with Pakistan’s central government, and its  transformation from an independent insurgent movement to one increasingly affiliated with an al-Qaeda-style global agenda.