Can there be Peace without Normalisation?

Can there be Peace without Normalisation? 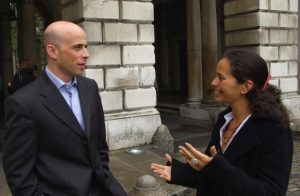 Yesterday ICSR’s Atkin Fellows Sagit Yehoshua from Israel and Manar Rachwani a Syrian now living in Jordan, discussed the issue of normalisation as way to bring the peace process forward in the Middle East.

Sagit first expressed her difficulties to meet and have Arab friends. She explained how, even in London, in a “neutral” country like the UK, she is struggling to socialise with Arabs who tend to refuse any communication with her as soon as they learn where she’s from.

Manar then went on to address the concept of normalisation and the reasons for anti-normalisation movements. In neighbouring countries, relations with Israel are kept secret mainly because they remain socially unacceptable.  That stems from the fact that most people in the Arab world are convinced that normal relations cannot exist before there is a comprehensive peace between Israel and the Palestinians.

While the anti-normalisation movements grow stronger in the region, Sagit and Manar drew from their experiences to explain why the concept of normalisation needs to be addressed as an essential step in the peace process. They both argued that communication between people can bring peace to the region. The Atkin Fellowship as well as their shared experience is the result of that desire to bring together two people from both sides of the conflict and give them the opportunity to develop their ideas on how to further peace and understanding in the Middle East.