Hamas and the Arab Peace Initiative – by Dr Alon Ben-Meir

Hamas and the Arab Peace Initiative – by Dr Alon Ben-Meir 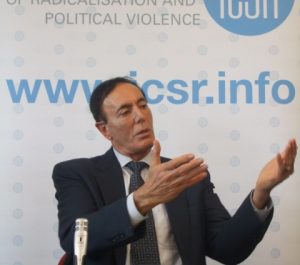 Dr. Alon Ben-Meir tried in his talk to answer the eternal question of ‘how to solve the conflict between Israel and the Palestinians’.

Focusing on Hamas as a crucial actor of the solution to the conflict, he showed that their religion-based ideology was one of the hardest obstacles to overcome. The goal of Hamas is to bring down the state of Israel, and this goal is so sacred it sanctifies the means. Then how do you change the mindset, he asked?

The Arab initiative, if the European Union led by the UK supported it, could be embraced by Israel and the Palestinians including Hamas without them losing faith and feeling they have to renounce their ideology.

Hamas has shown an unwillingness to cooperate with demands from the international community, but it seems that with new US efforts to push reconciliation, Hamas now has a unique opportunity to join the political process as a recognized party.