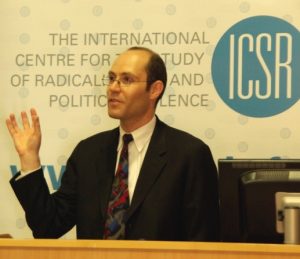 Terrorism by means of weapons of mass destruction (WMD) has been studied for decades—since the Cold War and fears of secret agents with suitcase-sized atomic bombs. Although WMD research has accelerated since September 11, 2001, there has been “a lot of hype but very few detailed answers” around the subject matter, as Ackerman put it.

Providing insight on one of the foremost security issues of the 21st century Gary Ackerman presented his new book Jihadists and WMD in an event hosted by ICSR. It is an authoritative work addressing the threat of weapons of mass destruction in the hands of jihadists, both historically and looking toward the future threat environment.

In this book leading international experts clearly differentiate between peaceful Muslims and jihadists, exploring how jihadists translate their extreme and violent ideology into strategy. They also focus on WMD target selection and the spread of WMD knowledge in jihadist communities.