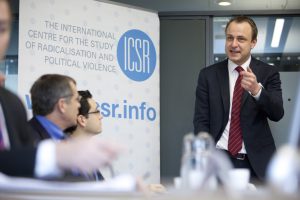 On Monday, ICSR took a very important step in its project De-radicalisation and Disengagement in Prisons – Lessons from 15 Countries, by holding a very successful workshop which gathered experts, practitioners and members of government.

The workshop brought together 12 authors who, after having each studied the experience of a country with de-radicalisation, confronted their findings. Fifteen countries were represented (from France to North America and from Yemen to Indonesia), each of them having dealt or currently dealing with the problematic of radicalisation in prison.
Much has been said and written about how people engage in terrorist activities. Only recently has the focus on getting terrorists to disengage from terrorism made its appearance in research on terrorism.

Facilitating disengagement should be a core element in counter-terrorism policies: using repressive means alone to fight terrorism can lead to costly mistakes. Over the years prisons have become breeding grounds for radicalisation. Seeking to resocialise and reintegrate individuals convicted for terrorism appears therefore as a crucial factor in the fight against terrorism.

After having presented their case studies, the contributors engaged in lively debate with the audience. We realised that the lack of attention given to this topic in counter-terrorism strategies did not reflect the abundance of interest that it generated.

The discussion revealed the need for an empirical research to assess the applicability of these programmes and see how they could work on a broader level.It also highlighted the need to define the goals of these programmes especially in terms of what the former terrorists are to become: should they be made to divert into non-violent activism? Or should they just stop interacting with militant movements?

This workshop was just the first step of this study. It aimed to generate spontaneous discussion between the authors about their results, as well as to gather the opinions and expertise of the audience.

As a result of this comparative study ICSR will produce, in 2010,  the first, systematic overview of best practices in this area. It will allow governments, the media and experts to learn from a wide range of case studies. And most importantly, it will help Western governments to avoid costly mistakes in addressing the new challenge.