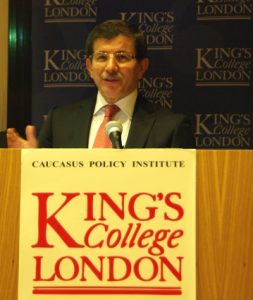 His Excellency Ahmet Davutoglu, has been Turkey’s Foreign Minister since May 2009. In his speech last night he outlined Turkey’s concept of a ‘Eurosphere’, an enlarged EU including the Republic of Turkey, and the role the country would play as a link between Europe and the Middle East.
He said Turkey’s foreign policy in the Middle East sought to ease tensions by promoting mutual respect, thereby making a contribution to stability and peace in the region. ‘We do not want a ‘Cold War’ in the Middle East between what is labelled as moderate and extremist states,‘ Professor Davutoglu said.
He also announced that Turkey will hold a meeting on 25 January with the aim of promoting a framework of reconciliation within Afghanistan and co-operation with neighbouring states, especially Pakistan.
Economic links for stability
He argued that economic relationships should be increased in order to solve the problems in the Caucasus, a policy Turkey is pursuing with its neighbouring countries. He said that Turkey had recently signed 51 agreements with Syria and 48 with Iraq.
His speech followed a meeting with the British Foreign Secretary David Miliband. Professor Davutoglu explained that the agenda had included Cyprus, Afghanistan, Iraq and the global economic crisis.
The event was hosted by the Caucasus Policy Institute (CPI) at King’s, directed by Denis Corboy. Denis Corboy commented ‘We were honoured to host His Excellency Ahmet Davutoglu. He is the principal architect and leading proponent of a range of new policies that foresee Turkey as more than a regional power within Europe, playing a critical and influential role for peace in the Middle East, the Caucasus and in world politics.‘
He continued, ‘In recent years the Institute’s work has been mainly concentrated on conflict resolution issues. During 2010, CPI plans to focus its study programme more specifically on the security and political aspects of the region’s relations with Russia and Turkey, so His Excellency’s thought-provoking speech made for an inspiring beginning to the new year.‘