The Army of One: al-Qaeda’s evolving strategy and the ‘lone wolf’

The Army of One: al-Qaeda’s evolving strategy and the ‘lone wolf’ 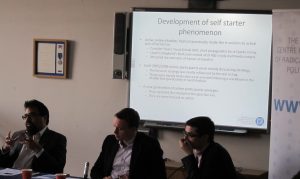 In their recent seminar Raffaello Pantucci, Associate Fellow at ICSR and Shiraz Maher, Senior Fellow at ICSR gave an interesting and insghtful account into new Al-Qaeda developments in the West.
The premise of their event was that Al-Qaeda has been rethinking its strategy in the West. With a lessening capacity to stage large-scale attacks such as 9/11 and 7/7, it is now seeking to recruit self-starters who are often radicalised through the internet. Almost impossible to detect, these ‘lone wolves’ pose new and unique challenges to the authorities and security services in the West.
As part of this seminar Raffaello Pantucci explored the lone wolf phenomenon, with the launch of his paper “A Typology of Lone Wolves: Preliminary Analysis of Lone Islamist Terrorists“. ICSR’s Senior Fellow, Shiraz Maher, contextualised this with regards to al-Qaeda’s evolving strategy in the West. Drawing on new tactics as seen in al-Qaeda’s English language Inspire magazine.