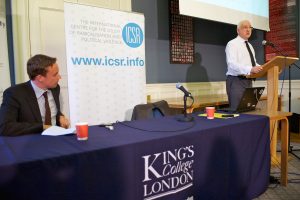 The Zafrullah Khan Lecture and Essay Prize Giving- Recent Changes in Counter-Terrorism Law: An Expert’s perspective.
In his lecture, Lord Carlile gave a full account of the state of the art of UK counter-terrorism law, from its theoretical and moral basis to more technical issues such as the functioning of control orders and the influence of the Government’s political agenda.
Lord Carlile started by strongly affirming that the ultimate aim of counter-terrorism is to foster de-radicalisation through what he called a “partnership in diversity”. Still, he acknowledged that views on how to practically implement this plan are affected by what he defined as a gap between political stances based on a political agenda, and positions based on the analysis of available evidence and intelligence. Lord Carlile drew from his own experience as an independent reviewer of counter-terrorism legislation in order to tackle the confusion on key concepts such as threat, risk, intelligence, and evidence; furthermore, he affirmed that although an increasingly high percentage of documents and sources, when talking about terrorism, is nowadays available to the general public, a high degree of knowledge is still only available to those who have access to classified documents. This, according to Lord Carlile, only widens the gap between politically-driven and “technical” views.
Moving on to the way counter-terrorism legislation is designed and implemented, Lord Carlile identified past mistakes and contemporary changes going on in the world stage as major sources of inspiration for legislators. Citing examples such as the Arab Spring, he noted how the golden rule of not imposing ethical standards on others would work also in fostering de-radicalisation.
Lord Carlile went on to comment on the debate around special measures such as control orders and relocation, defending them as essential, in spite of widespread criticism. The concerns expressed by the former independent reviewer revolved around the influence of political agenda on the delicate matter of counter-terrorism legislation. In this context, he identified the main danger of coalition politics in its potential for being an enemy of reason, and expressed concerns about the quality of anti-terrorism legislation. According to him, these concerns are particularly justified given the ever-changing context which must also take into account the influence of international bodies such as the EU. This environment, Lord Carlile said, generates a dynamic and changing Counter-Terrorism legal scene, and the present Government still has work to do in that direction.