Counter-Insurgency in Helmand and Beyond

Counter-Insurgency in Helmand and Beyond 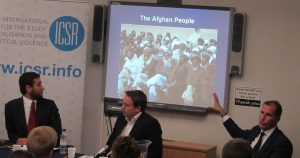 Lt Col Dougie Graham and Ryan Evans discussed how counterinsurgency theory worked in practice in Central Helmand Province. Lt Col Graham analysed his approach as a Battlegroup Commander and Commanding Officer of the Royal Highland Fusiliers grappling with a complex insurgency around Lashkar Gah, the district capital. He explained that any understanding of what is happening in Helmand has to be seen in the context of how operations evolved from 2006 to 2010. He particularly emphasised the centrality of the Afghan National Security Forces and, in particular, the Afghan National Police in ensuring future stability in Afghanistan. Evans provided the perspective of a Human Terrain Team member working with Task Force Helmand. He explained how land tenure disputes, enduring local factional conflicts, and the narcotics industry drive violence in what is a very local insurgency. Both Lt Col Graham and Evans insisted that while key “COIN maxims” (force density, minimal use of force, civil-military cooperation, intelligence-led operations, and rule-of-law) may be crucial to success in counterinsurgency, they do not ensure success. They merely are “entry tickets” that “get us into the game.”
Lt Col Dougie Graham recently retired as Commanding Officer of the Royal Highland Fusiliers, 2nd Battalion the Royal Regiment of Scotland. During his most recent tour in Helmand from October 2010 – April 2011, he served as Battlegroup Commander in the area encompassing the recently transitioned capital of the province, Lashkar Gah.
Ryan Evans, an ICSR Associate Fellow, served as a U.S. Army Human Terrain Team Social Scientist during the same period. His team was assigned to the British-led Task Force Helmand.
To listen to the talk, please click here.
To listen to the subsequent question and answer session, please click here.