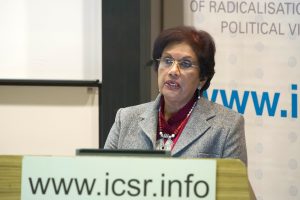 The former Sri Lankan President Chandrika Kumaratunga was introduced by Lord David Trimble (both ICSR Patrons), who praised her invaluable experience and bravery in dealing with the Tamil Tigers.

After her introduction, President Kumaratunga provided the audience with fascinating details about her government’s negotiations with the Tamil Tigers, and provided some insight into what lessons could be learned from these talks.

She also spoke about her own personal experiences with terrorism, having lost her father to an attack by a Buddhist extremist, and falling victim herself to an attempted assassination by the Tamil Tigers which resulted in her losing her right eye.