On Thursday, the Islamic State adopted the perpetrator of the Westminster Bridge attack as one of its own. It claimed the assailant was “a soldier” of the so-called caliphate who “carried out the operation in response to calls to target the people of coalition nations.” The attack was by no means an anomaly. Indeed, over the course of the last few months, the Islamic State has adopted a growing number of similarly unsophisticated, high-impact operations in Europe and elsewhere. In so doing, it has come to present a new kind of salafi-jihadist menace across the world.

However, despite its terrorist grandstanding,  the Islamic State has been in unambiguous decline since mid-2015: its territories have shrunk; its rate of incoming foreigners – once a flood of men, women, and children – has dwindled to just a trickle; and, on top of that, dozens of its senior leaders have been killed. Besides losing territory, experienced leaders, and a steady flow of recruits, there is one more indicator of the Islamic State’s decline that has been largely overlooked: its propaganda.

By evaluating the quantity, quality, and thematic makeup of the group’s official media output, it is possible to identify its most pressing priorities and determine how it wants to be understood, both by supporters, and adversaries. To this end, I recently compiled and analysed an exhaustive sample of all official Islamic State media produced during the Islamic month of Jumada al-Awwal in the year 1438 – that is, 30th January 2017 to 28th February 2017.

A preliminary descriptive analysis of that data follows below.

During the time period in question, the Islamic State released 570 individual media products – that’s an average of 19 each day. (NB: This figure excludes operation claims and officially prescribed tweets.)

Sixty-one percent of them were photographic reports, 21 percent were unedited video clips, 11 percent were written materials (meaning magazines, bulletins, and newspapers), and five percent were audio statements. Just two percent of the Islamic State’s propaganda came in the form of the high production value videos that the group is famous for. An even smaller number featured ultraviolent content.

Given that the Islamic State published 892 units of propaganda at its height in the summer of 2015, this new dataset indicates a productivity drop of approximately 36 percent. 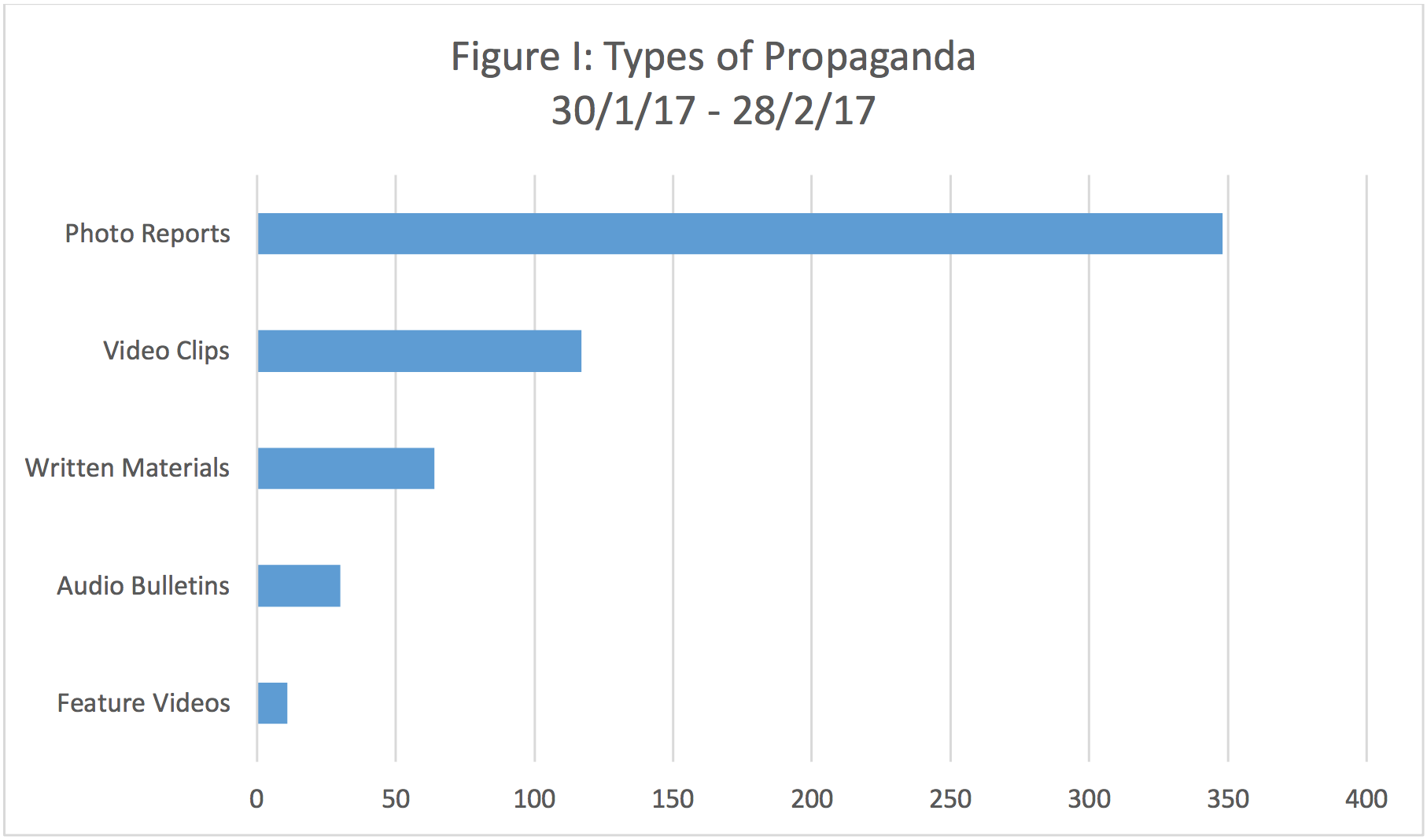 The Jumada al-Awwal data also demonstrate that the Islamic State’s “global caliphate” is, at present, more parochial than it has been for years. While a handful of propaganda products did emerge from affiliates in Nigeria, Egypt, Somalia, Yemen, and Afghanistan, the group’s narrative revolved almost entirely around Syria and Iraq in early 2017; indeed, as Figure II indicates, no less than 93 percent of the propaganda released that month focused on the caliphate’s Syrian and Iraqi heartlands.

When broken down on a regional basis, the data show that most of the propagandists’ attention was devoted to depicting the Islamic State’s efforts to defend the Iraqi city of Mosul, and the Syrian town of Bab, a trend that is broadly consistent with the last few months. This is intuitive – the group cannot afford to appear impotent in either battle, each of which presents a grave threat to its insurgent prospects. 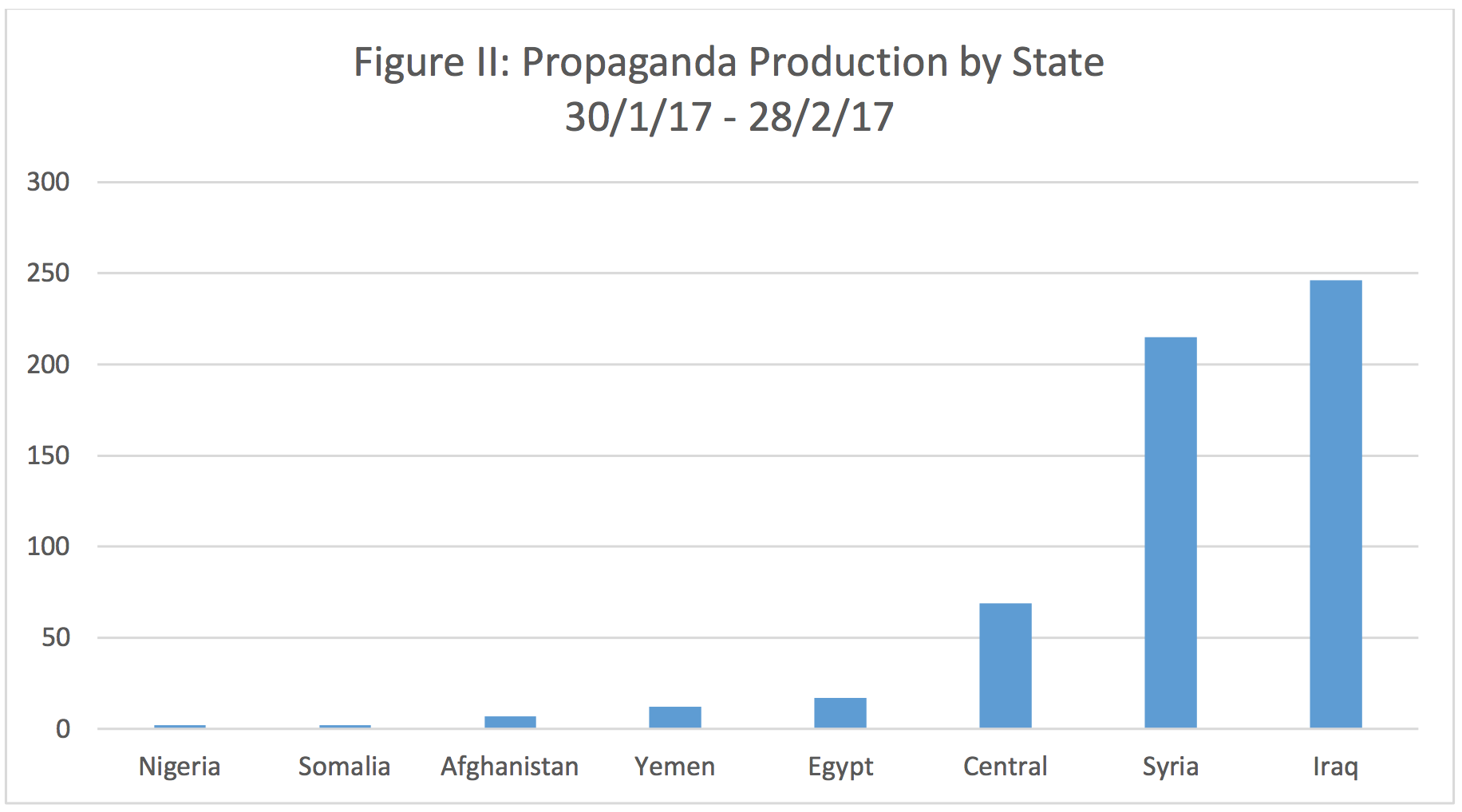 Moreover, thematic analysis of the Jumada al-Awwal data indicates that the Islamic State engaged in a narrative volte-face during the nineteen months preceding the data collection period, one that saw its portrayals of utopian life in the caliphate become overshadowed by warfare.

As Figure III shows, in the summer of 2015, utopia-themed propaganda comprised the largest proportion of the Islamic State’s total output (at 53 percent), with warfare-themed propaganda comprising 39 percent. However, as Figure IV shows, by early 2017, this trend had reversed. Just 14 percent of the propaganda released in Jumada al-Awwal was utopia-themed, while 80 percent of it focused on the Islamic State’s war effort.

That being said, its utopia did take centre stage in the higher impact propaganda videos released in Jumada al-Awwal – indeed, the idea still underpins much of the group’s ideological allure. It is, in marketing terms, its unique selling point.

In sum, the Jumada al-Awwal data present unambiguous evidence that, in spite of its terrorist infamy abroad, the Islamic State is suffering at home. As its territorial clout, leadership, and manpower depleted over the course of 2016 and early 2017, the group was forced to recalibrate the strategic parameters of its propaganda narrative. In so doing, it reverted to salafi-jihadist type, coming to rely more than ever before on military-themed media than governance propaganda.

In any case, it is crucial to understand that, for the Islamic State, media products – whether they are gruesome videos or vague statements released in the wake of terrorist attacks like that in Westminster this week – are weapons.

Both at home and abroad, they enable it to intimidate adversaries, coerce acquiescence, and buoy the morale of supporters. With this in mind, the Jumada al-Awwal data, indicating as they do that the Islamic State has been pushed onto the narrative back foot in Iraq and Syria, are cause for optimism. However, as the aftermath of this week’s attack demonstrated, even when suffering internally, the Islamic State can derive copious amounts of notoriety by inspiring violence far away.

Charlie Winter is a Senior Research Fellow at ICSR. Follow him @charliewinter