Conflict Trauma and Violence: How Can We Promote Peace?

The past two decades have seen a slew of programmatic efforts aimed at countering an individual’s susceptibility to violent extremism. These initiatives have delivered uneven results. This blog post examines the role of mental health and conflict-related trauma in driving individuals towards embracing violent extremism. By showing the high propensity of pre-existing trauma and associated mental health problems among violent actors in extremist movements, it argues that successful interventions cannot afford to overlook this component of the “radicalisation” puzzle.

Studies that have examined prison1 and community-based populations2 have shown that individuals who use violence are significantly more likely to be survivors of violence and trauma than their non-violent counterparts3. Whilst this is true for different types of violence – for example, against an intimate partner, children, strangers – it is also true for those who pursue violence for ideological or political goals. The documented link between trauma and the propensity to engage in violence is particularly sobering when considering the prevalence of trauma among conflict-affected populations: it is thought that up to 65% of civilians affected by civil war or conflict suffer some form of recurrent trauma4. This can include violence and/or rape, but also forced displacement, homelessness, starvation and slavery.

Programming to support violence and conflict prevention must incorporate a better understanding of the types of trauma experienced by conflict actors and the communities in which they operate. Two things are particularly important here: (i) types of trauma(s); and (ii) how trauma can be transmitted from one generation to the next. Violence driven by a desire for revenge is often borne of complex traumas that involve incidents such as family members being killed or kidnapped and/or suffering prolonged periods of imprisonment or torture5,6. Traumatic stress can also manifest in individuals who have been exposed to some form of abuse outside of conflict dynamics – for example, being abused by a parent. In this scenario, parents who are traumatised by conflict can, in turn, transmit their experiences by traumatising their children who are then more susceptible to violence themselves when entering adolescence or adulthood7,8. Trauma-related mental health problems, such as post-traumatic stress disorder, depression, or anxiety, are important because if they are untreated, not only do they associate with violence, but they can also leave an individual vulnerable to joining up with a violent extremist group9.

Appreciating these interlocking dynamics is important when considering how to break cyclical periods of violence and peace in recurrent conflicts. Put another way, how might a better appreciation of the interaction between trauma and mental health inform our understanding of how and why an individual might choose either a violent or peaceful action? Our working hypothesis on the KCL team for The Cross-Border Conflict Evidence, Policy and Trends (XCEPT) project – and it’s one that we’ll be empirically testing as the research progresses – is that trauma is an often overlooked but extremely important part of an individual’s ‘radicalisation’ journey. In brief, XCEPT is a multi-year, interdisciplinary project with funding from UK Aid, that examines factors that shape violent and peaceful behaviour across different conflict-affected regions, such as Iraq, Syria, and South Sudan, to inform policy and programming efforts to prevent violent extremism.

The good news for policymakers is that trauma-related mental health interventions related to traumatic events need not be created de novo. There are already several effective interventions that are scalable, which means they can be offered to large numbers relatively cheaply. Bodies such as the World Health Organisation have databases of scalable interventions which are ready to go10. These are culturally adaptable and can be deployed through easily trained partners on the ground.

Consider one particularly encouraging intervention for children and teenagers, known as Teaching Recovery Techniques. This helps individuals learn socio-emotional skills to cope with difficulties following traumatic experiences of war11-13, whilst also teaching them how to manage intrusive thoughts and feelings (bad memories, nightmares and flashbacks), arousal (difficulties relaxing, concentrating and sleeping) and avoidance (fears, difficulties in facing up to reminders of a disaster).

Although this is just one example of many, it shows the types of interventions already available which are easily scalable and which can be delivered over a relatively short period (in this case, just five weeks). It is also important to consider that this intervention can be modulated to address non-conflict related traumas (for example, childhood maltreatment).

Trauma is cumulative. The more individuals experience it, the more likely they are to have greater mental health problems. That, in turn, increases the risk of them turning to violence. Some estimates suggest that up to 50% of people who join violent extremist groups demonstrate some form of childhood maltreatment: neglect, or physical or sexual abuse9,14. This reveals the importance of adopting a holistic intervention approach around trauma and mental health to effectively manage an individual’s risk of choosing violent outcomes in any given situation15, and to include such approaches in interventions to promote peace and prevent resurgent conflict violence. 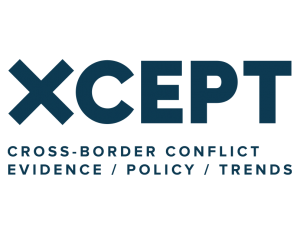